I spent some time today reading all the articles I could find that were about getting the women to vote and how vital it is. Article after article encourage women to hit the polls and cast their vote in support of women’s rights. Then I ran across this statement :  “In the end, the results of the 2014 midterm elections will serve as a test of how much voters, and candidates, really care about women’s rights.”

I find it incredibly insulting that it is assumed that I will vote for a certain candidate simply because I am a woman. The theme that “women voters are vital to success” is coming pretty solidly from one side. I resent the implication that if I vote for a different candidate, I am anti-women’s rights. And really, talk about dumbing down the collective mentality of the voting public, specifically the women voters. Forget researching all of the issues, forget making an informed or educated decision on who your leaders will be; nope, all that your vote, your voice, will say is that you are either for or against women. And women? It’s apparently assumed that you will vote for the “pro-women” side.  After all, if you don’t, you are clearly saying that you want all women to be oppressed, subjected to the whims of men, lose all say over what happens to your body, and never make any decent money.

Voting for one candidate does not automatically mean that you are against everything the other candidate represents. The world is not that black and white. The scope of the work that needs to be done by our elected officials is broad and vast; it is irresponsible to take one piece of that, like women’s rights, and elevate it in importance above everything else. Look, it should never simple to decide who to vote for in an election; it’s not supposed to be. I could easily just check the box to vote Republican or Democrat on every candidate, but political party affiliation is not enough to ensure that they will be a good leader. Voting for someone based on a single issue is not how to choose a leader. You wouldn’t hire someone to be the CEO of your corporation based solely on a single skill; you wouldn’t hire them simply because they’re a mom, or because they do or don’t use birth control. Of course not. You would find someone who has the most qualifications for the job. Why is choosing our state and federal leaders and representatives any different?

I do not vote for someone because a twisted political message or expensive television ad tells me to. I do not vote for someone simply because they’re a man/woman/crocodile. I certainly do not vote for someone because my gender, race or people of the same sexual orientation tell me that I should. Let me tell you how I do vote. I vote in favor of a candidate that I feel has the qualifications to manage thousands of diverse people, an entire state, or this giant country.  I look for fiscal sense, business acumen, military and foreign policy management, and understanding of the law. I look for someone who speaks with confidence and intelligence and not in talking points and clichés. I do my best to filter out the ridiculous generalizations like “he is against women” and “hey, I’m a mom too!” that are a good 80% of political campaigns this time around. Show me how you will be the best person to be elected, and I will vote for you.

Don’t stay home on Election Day, November 4th. PLEASE EXERCISE YOUR POWER… ALL YOU HAVE TO DO IS SHOW UP!

Thank you for that little pep talk. Will there also be someone outside the polling station, clapping her hands encouragingly, and calling out “Ladies! Thank you for coming, ladies! Head right on in and vote for women’s rights!” Honestly, that is what all these constant calls for women to get out and vote sure sound like. Telling women that all they have to do is show up [and we will help you vote!] is exactly the opposite of empowering them. It is a step backwards. It is assuming that women couldn’t possibly want to vote their own mind, or even know how to, and therefore need manipulation and help to do it properly. 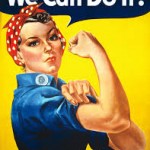 Women voters can make up their own minds!

Women should get out and vote, but for no different reasons than why anyone else should. Women voters don’t need the issues boiled down to one all-inclusive catch phrase to know which direction to cast their support. Give them some credit and let them make their own choice. Stop making the election be about absolutely nothing except them. Women, please, you are allowed to have more issues that you find important other than the over-politicized plight of your gender!

As for me, I will exercise my power, not as a woman, but as an American. I will do more than just “show up.” I will vote for the candidate(s) who I feel will work hard to do what is best for everyone. The list of problems in this country is a mile long, and I am perfectly capable of researching the issues at stake and making an informed choice. It is my responsibility to do so. I can decide for myself, thank you. Please do not insult me by assuming that I cannot.