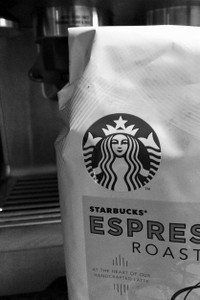 The CEO of Starbucks, Howard Schultz, has launched a campaign “to stimulate conversation and debate about the race in America by getting employees to engage with customers about the perennially hot button subject.”  Mr. Schultz seems to have a reputation for being outspoken and creating controversial policies.  Basically, he’s a big blowhard and he enjoys coming up with brilliant plans that will stimulate outrage and give his company more PR.  For better or worse, Starbucks’ stock went up about 35 cents per share between yesterday’s close and today’s, so maybe there really is no such thing as bad publicity.  At any rate, he’s done some pretty ridiculous things in the name of … well, whatever political or social agenda he wants to advocate for.  For now, though, let’s just discuss this one, because I honestly do not get it.

How is a Starbucks employee taking my drink order and/or handing me my coffee going to “engage” me in discussing race relations?

That sounds like wonderfully light reading material to peruse while standing in a long line to buy over-priced coffee.  Great idea – irritate people who are already in a hurry, are possibly already in a bad mood, and have yet to get their morning caffeine fix.

“The goal is simply to foster discussion and an exchange of ideas.”

Starbucks wants their employees to engage you in discussion and debate about race relations.

Okay – so that makes sense as a stand-alone statement.  It does not make sense in the context of selling and serving coffee.  To be honest, I can’t think of very many ways that would be less effective than this one at helping to improve race relations.

If my barista hands me a cup with “Race Together” scrawled on it, and asks me something like “What do you think about race relations?” I can honestly say I would probably stammer something back like “Um…what?  Oh…they seem…bad?”  Because really…what do you say to that, no matter what race you are?  What valuable discussion and/or idea exchange could I have with my barista that would fit into the 30-second span of time that I’d have before the customer behind me wants to hit me with their purse? And once we exchange these ideas, then what?

It’s like those unfortunate waiters who have to offer you today’s special of Crazy Chad’s Rad Ribs with a Slammin’ Side of Totally Tubular Taters. They have to say those words. Out loud. Over and over.

So if a barista timidly asks me “Can I talk to you for a sec about race relations?” while being glowered at by everyone behind me in line, I am going to feel like handing him/her a tip just for getting the words out.

Online, comments about this are going beyond just “wow, what a dumb idea”; instead, people are hurling horrible insults at the Starbucks employees…just for being Starbucks employees. The thousands of Internet trolls simply cannot be pleased. They insult those who don’t have jobs, who aren’t trying to pay their bills, who aren’t trying earn tuition money or pay off a student loan. They shriek “Get a job!” and then they turn around and insult the people who are doing exactly that. Ugh…Seriously, folks, get a grip. This campaign might be an odd thing to do, it might be an ineffective and/or annoying thing to do, but it’s certainly nothing to get all up in arms about. And it is not something that makes the individual employees deserving of insults and misdirected rage.

Someone writes a catchphrase on your cup?  So what.  They write all sorts of things on the cup already.  Cover it up with tape.  Ignore it.  Move on with your day.

Your barista tries to engage you in conversation about race relations?  Simply shrug and say “I’m sorry, but I have to go.”  Better yet, if they seem uncomfortable, give them a friendly smile.

Schultz claims the race relations discussion is completely voluntary, so a barista who is not comfortable being verbally attacked by a customer who takes stuff like this way too seriously can opt out of participating.  Hopefully it stays voluntary. I suspect that individual store owners are going to feel some pressure to “encourage” their staff to actively engage in this campaign.

So yes, Starbucks-customers in certain cities across America, this is happening.  Love it, hate it, gripe about it, shrug it off.  Feel free to think the CEO is a loose cannon who should tone it down, or that he should be removed from his position, or just shut up once and for all.  But please…please give the employees a break.

In the meantime, if someone can enlighten me as to what a coffee-shop conversation about race relations would entail, I would be very grateful.