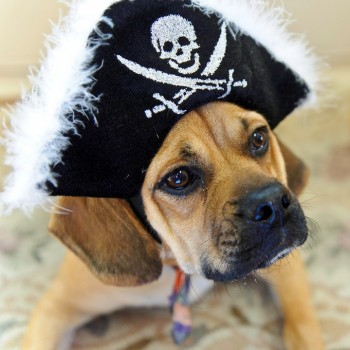 “Modern Kindergarten” is a tongue-in-cheek series based on my experiences as a new Kindergarten Mom.

If there is any holiday that has the potential to beat Christmas in the battle for kids’ favorite day of the year, it is Halloween. And why not? Candy! Parties! Costumes! (Even Christmas doesn’t have costumes!)

The classroom Halloween party is now on the list of highly-anticipated events, right behind trick-or-treating. This is partly because any variation from the daily grind of learning is always welcome. After all, what kid doesn’t love to hang out at school with their friends and not have to be learning? Mostly, though, the Halloween party at school is the best way for kids to show off their costumes to each other. Trick-or-treating is usually with family, especially at a younger age, and it’s dark and chaotic. But that classroom party is brightly lit and filled with a captive audience to whom a kid can showcase their chosen costume for that year.

Since my daughter goes to a Catholic school, there are a few guidelines around what types of costumes are not allowed for the Halloween (aka All Hallow’s Eve) Party:

– Nothing “evil” (zombies, serial killers, other assorted bloody things)
– No monsters (see above)
– Nothing with weapons
– School appropriate (nothing revealing, must be modest, etc.)

Awesome. Well, that sounded easy enough, especially with a daughter that isn’t really into any characters that would violate those rules. I asked her what she wanted to be this year and she excitedly told me: a cheetah.

I should have guessed it. She is into everything cheetah-print right now. She wants to be a vet/zookeeper and loves cheetahs. But…a cheetah costume? For a girl? That is school appropriate?

Do you see where I’m going with this?

I literally groaned. I began to search online, and then I groaned even more.

A Google search for ‘little girls cheetah costume’ brought up this:

I mean, I fully expected it, but I still had to shake my head when I saw some of these. #2 and #3 are kind of cute, but they are ridiculously glamorous and would never stand up to multiple wearings. #4, #5, #6, and #7 — those are the results when looking for costumes for little girls? And only 4 out of all those images are even actual cheetah costumes; the rest are just, well, clothes in a cheetah print. Boring.

So, back to searching I went, keeping a tab open with #8 as the best possibility. I will admit, some of the cheetah-print tutu costumes are pretty cute, but those aren’t fun! Dressing up like a cheetah is fun! Have you ever tried to find a little girls’ costume that isn’t a) way too grown-up in style (think fishnets, short skirts, and fitted tops); b) a princess dress; or c) containing a tutu? Try it sometime. It’s really…frustrating. 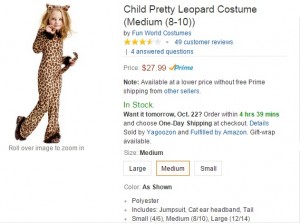 Finally, I threw up my hands and went back to my saved tab with #8 on it. According to the description, it’s actually a leopard, but who can tell the difference, right? As long as there isn’t a person with animal print reference cards hovering around, my daughter will never know that she is a leopard-impersonating-a-cheetah. My husband gave it his stamp of approval (which is pretty good, because he’s more of a prude than I am). I showed it to my daughter and she immediately and enthusiastically said yes.

It’s actually quite a nice little costume. The great part is that there is room to put layers under it to protect against the frigid Halloween temps here in the northern climes, but the layers won’t cover the costume itself. Win/win!

So, another year of costume-hunting is in the books. We have a costume that should weather all the Halloween events pretty well. And I did not have to spend a fortune to accomplish this.

Bring on Halloween. We are ready! 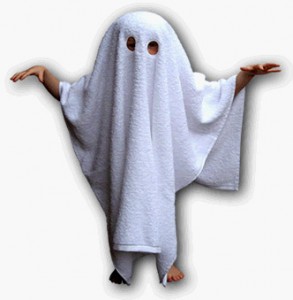 This costume remains in first place for my favorite costume of all time.