The Sayreville Horror: Focus on the Real Problem! 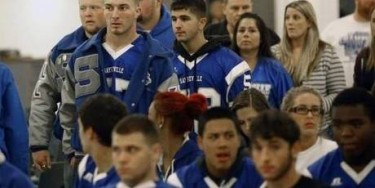 Police in Sayreville, New Jersey, have arrested seven football players in connection with the allegations of hazing that went beyond just a “rite of passage” and instead became outright sexual assault and rape.  Details are still emerging of the horror the victims were forced to endure for a time period of possibly up to a year, each new detail more disturbing than the last.

I wrote about this a few days ago when there wasn’t a lot of confirmed detail and the whole affair was still just being called “bullying”.  Parents and students were bemoaning the loss of their football season and very few seemed to grasp just how bad this situation really is.

The indignation over the cancellation of the football season has suddenly seemed to die down.  To their credit, perhaps people finally are starting to realize that what was done to those victims and how it was even allowed to happen is so much more important than a bunch of silly football games. An atmosphere of shock, disgust, and uneasiness seems to have fallen over the school now. No one can believe what has been happening all this time.

One of the worst parts of this is that the coach himself has yet to show any remorse or any compassion for the victims.  I haven’t even read yet any statement where he expresses any outrage at his players for what was done.  His whole attitude seems to be that of just shrugging this off and not taking any responsibility for what happened under his charge.

“There will be a time and place when I have something to say, but now is not the time,” he said. “I need to sit down with the administration.”

Really, Coach?  That is all you have to say?  I have a feeling that he has been legally advised to say nothing due to the very real possibility that he will soon be facing some sort of criminal charges himself.  I just don’t see how he couldn’t be held accountable for something.  In the meantime, he continues to remain quiet as the public demands for his firing and/or arrest get louder and louder.

One thing that is really getting to me is the constant talk of “we need to review the anti-bullying law”.  Really?  Last I knew, sexual assault and rape already have laws against them, laws that are pretty black and white.  Is it really necessary to waste time creating a new law that says sexual assault and rape are illegal specifically if done in a bullying or hazing situation?  It’s already illegal in ANY situation!  Lack of governing law is NOT the problem here.  Do not focus on “oh, how can we legislate this better”; focus on the culture in that locker room (and most likely in locker rooms all over the country) that allowed this to happen in the first place.  Focus on the culture that makes students believe that the law does not apply to them.  Focus on the culture that made the witnesses and victims believe that they could not report this stuff for fear of not being believed, or worse.

I have the utmost respect for the student who made the first accusation, which gave the other victims the courage to also come forward.  My heart goes out to those victims and their families for what they’ve already endured and for what they will continue to endure both in the immediate future and for the rest of their lives.