Book Review: The Heretic Wind: The Life of Mary Tudor, Queen of England 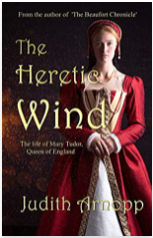 The format was told in first-person from Mary’s POV on her deathbed, with Mary telling a servant girl her story.

Two main disappointments:
1. The bulk of the book covered the time leading up to Mary taking the throne. Once she was Queen, the book felt really rushed and just glossed over her enforcement of Catholicism and marriage to Philip, almost like an afterthought.
2. While most other accounts pretty much support that Mary was self-righteous and crotchety, it did get tiresome being in her head, especially since we only got to spend a small time in her head as Queen, the biggest draw for me to this story.

There were some inconsistencies in spelling and terminology but overall not as bad as some of this type of book. It just felt rushed; too much time spent chatting in “present day” with servants and not enough time recounting actual events. Some pretty big events, like the execution of Jane Grey, were barely mentioned.

What was done well is portrayal of Mary’s sheer misery all throughout her life. You could feel her misery as hopes were pulled up and dashed down. She was miserable and I felt it.

3 stars for content and solid story-telling, but it almost lost 1/2 star for readability.

I may try other books by this author.

View all reviews by Melanie Joyce →