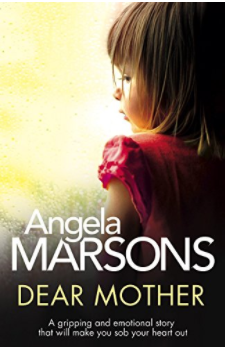 When I began this book review, I didn’t realize right away that this book was originally published as The Middle Child and not Dear Mother. So…there’s that. Either title will lead you to this book by Angela Marsons.

The book promised that I would “sob [my] heart out”. Sadly, this did not happen. There was one scene, the Ferris Wheel scene (which is all I’ll say without revealing spoilers) that did bring some tears to my eyes, but it probably was not for the reasons why most people found the book heartrending.

The basic premise is 3 grown-up women dealing with the death of their evil abusive mother and how the abuse has affected their individual lives.

Catherine: Indifferent to her twin 6-year-old girls, she won’t consider them spoiled (when told that they are acting out for attention) or fill their heads with…useless encouragement (when told of a child’s talent in gymnastics or drawing). A particularly painful scene with during a parent-teacher conference occurs with the teacher trying to point out how the daughter looked at a photo on the wall and reproduced it with skill beyond her young years. Catherine’s constant response was almost literally “So…she looked at a picture on the wall and copied it? So…?” It was dreadful.

Alex: Foul-mouthed and constantly aggressive, drinking to excess and pushing everyone away, including her long-term partner Nikki.

Beth: She seems to have been living in a dream world for her entire life, and still manages to overlook the faults in her sisters and the past sins of her mother. (Also…why are sweet, quiet characters in books always called “Beth”?)

To be honest, as evil and cruel as the mother is, there is never really any reason given for why she is such an evil, horrible person. This made it a little harder for me to buy into. Most abusive-parent story-lines demonstrate a clear reason for that abuse (low self-esteem of the parent, a boyfriend/husband they elevate above the children, drugs/alcohol, etc.). But without a lot of back story on the mother, it kind of felt like we were just meant to accept “she was just evil” and go with that.

That aside, I read this book within a 2-day span, probably within 8 hours, because it did draw me in and I really wanted to find out how it turned out. Truthfully, Alex was the least sympathetic character to me and Beth felt shallow and predictable. Catherine felt like the most fleshed-out character and I felt both anger and frustration with her, but respect for her desire to change her way of thinking.

Overall, a really good book. It drew me in and kept me engaged to the end. A solid 3.5 stars.

Link to my book review on Goodreads

View all reviews by Melanie Joyce →