I just cannot express my disappointment enough…but I will try.

One the eve of publishing his new legal thriller, which frankly I was looking forward to, John Grisham has managed to alienate a large percentage of his readers and come across as a creep, all at the same time. 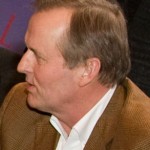 “There’s so many of them now. There’s so many ‘sex offenders’ – that’s what they’re called – that they put them in the same prison. Like they’re a bunch of perverts, or something; thousands of ’em. We’ve gone nuts with this incarceration.”  Grisham went on to tell a story of a “good buddy” who got caught in a child porn sting.  Apparently, “His drinking was out of control, and he [the harmless old white guy] went to a website. It was labelled ‘sixteen year old wannabee hookers or something like that’. And it said ’16-year-old girls’. So he went there. Downloaded some stuff – it was 16 year old girls who looked 30.”

DOWNLOADED SOME STUFF?  There is a major difference between accidentally viewing a site and clicking off it quickly when you realize you stumbled upon something illegal, and actually looking around and downloading?

And John Grisham, I am sad to say that you have lost a fan.