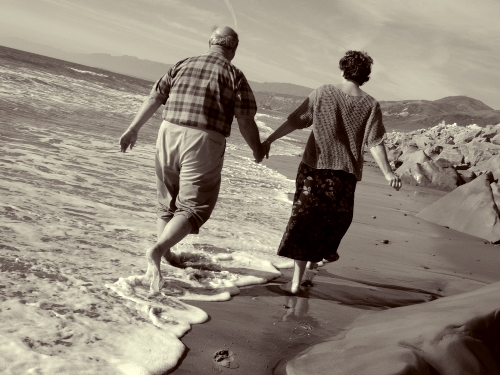 Jill Duggar married Derick Dillard this past weekend.  News media buzzed about how the couple had waited until they were engaged to hold hands and until they were married for their first kiss.

I’ve been reading as many articles as I could find about this young woman ever since her engagement was announced.  The articles themselves are unremarkable.  The comment threads?  They are a whole other story.

There were many supportive people who applauded this couple for their chosen self-restraint of intimacy; many even admitted that it wasn’t a choice they would make, but they congratulated Jill and Derrick for having the willpower to do such a thing.  I will admit that at first I was pleasantly surprised to see how many positive comments there were…but then I began to read further into the murky depths of the comment threads where the trolls live, and to be honest, the hatred, judgment, and just outright mocking was astounding.

Now, I don’t agree 100% with everything the Duggars believe in and stand for.  I think that they take certain parts of their faith a bit too far.  But you know what?  It’s none of my business.  Not only are they not hurting anyone, they really don’t even push their beliefs on others.  They are raising a large group of moral, well-adjusted, respectful and useful members of society.  Jill and her husband are both building careers; now they will start to build a family.  So they wanted to save what they perceive as incredible intimacy until they said their marriage vows.  So what?

Far too many comments were a derivative of these:
— You need to have sex before getting married. What if you find out that he’s X,Y, or Z [bad in bed, basically]?  Then you’re stuck!
— I can’t imagine buying a car without taking a test drive.  Why would I get married to someone without a test run?
— Those freaks! / Those religious fanatics! / JimBob is creepy/arranged everything/spies on his kids.
— How can they even be ready to get married when they have never kissed and most of their courtship was chaperoned? / They haven’t known each other long enough!
— They are telling us that if we kiss or hold hands before marriage, we are dirty!

For purposes of this article, I am putting aside anything to do with Jill’s parents and all their kids, and how they live, and what they believe.  Many of the mean comments were directed at Jim Bob and Michelle.  Maybe they’ve said some of these things, maybe they haven’t.  I do know that I’ve never read any article where Jill has said that if people don’t follow her lead for courtship and engagement that they are sinful and dirty.  I just want to focus on this: Jill and Derick had a long distance relationship.  When they met in person, they realized that they wanted to spend the rest of their lives together.  Soon thereafter, they got engaged and now are married.  They chose to restrict their physical contact.  Were their choices influenced by their parents and upbringing?  Of course.  Most people’s choices are influenced by their upbringing, but it still boils down to being their choice.  Theirs.  No one else’s.

First off:  There are no rules on how long one must know someone before they can be “ready” for marriage.  Some couples have fallen in love and married within days or weeks.  Some have had long distance relationships for years and then gotten married as soon as they could get together.  Many of these couples stay married for 40, 50, or more years.  On the flip side, there are people who date or live together for a decade and either never get married or they break up a few years into the marriage.  A successful marriage is not successful because you have known your spouse for X amount of time.  Marriage is not like earning a degree or a promotion; there is no set minimum on months dated before marriage is allowed.

So now that we’ve got that ridiculous non-issue out of the way, let’s turn to the real debate:  waiting until marriage to kiss and have sex.  This seems to what is causing the biggest storm of controversy in the comment threads.  Apparently it is now modern and ever-so-enlightened to belittle those people who have chosen to develop a true love that is born of communication, friendship, devotion, common values and common goals.

A kiss is just a kiss.  Sex is just sex.  Falling in love before you marry is priceless.

Today’s society seems to mistake great sex and physical intimacy with love.  You can’t possibly be in love if the sex isn’t great, right?  How can you possibly plan to spend a life with someone if you’ve never kissed them?  What if there is no spark?  What if they’re horrible in bed?  Look…it’s pretty simple.  When you don’t have sex with other people before you get married, then you don’t have anything to compare it to.  You won’t know if the sex is good or bad or mediocre.  All you will know is each other, and your personal intimate moments will be yours alone.  You will learn each other and the sex will only get better and better.  If you love someone with all your heart as the person that you want to grow old with, and you wait to kiss them and have sex with them, then it will feel right, and it will be perfect.  You will have a bigger spark than you could possibly imagine.

Have you seen the pictures of Jill and Derrick in the period between their engagement and their marriage?  Have you seen them holding hands?  They are wrapped around each other!  Some pictures they are linked up to the elbow.  They are grinning ear to ear, beaming with happiness.  They are best friends, they are planning their life together as eternal partners.  They are in love.

They are going to have a wonderful marriage.