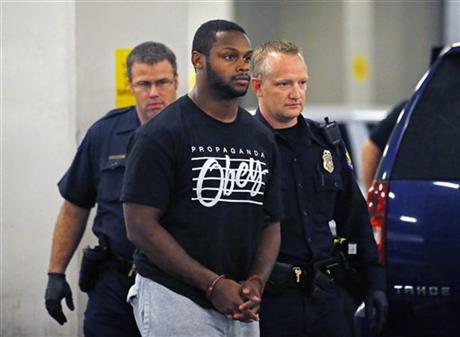 Sigh.  Will a single day go by when we won’t see an NFL player front and center – and booted off the field onto an “exempt” list – because of some sort of domestic violence?

This time it is Jonathan Dwyer, running back for the Arizona Cardinals.  The team claims they just found out about the accusations on Wednesday, even though the incident happened near the end of July.  That may be true, as Jonathan Dwyer was just arrested on Wednesday.  Apparently his wife finally came forward because she believed Dwyer to be suicidal.

The gist of the charge is this:  Jonathan Dwyer was trying to kiss and undress his wife.  When she refused, biting his lip, he head-butted her and the argument escalated, causing the neighbors called the police.  Dwyer hid in the bathroom and threatened to kill his wife and child if she said anything.  The next day he punched her in the face, threw a fit and punched holes in the walls, and threw a shoe at his 17-month-old son.  (Source)

The court of public opinion is screaming for the head of NFL Commissioner Roger Goodell, who was already unpopular for his mishandling of the Ray Rice incident, as well as the more recent Adrian Peterson legal mess.  Is Goodell at fault for what is going on in the league?

I am of two minds.

These are grown men – adults – and they are acting as if they are accountable to no one.  Many of them were coddled through high school, carried through college, then had bags of money thrown at them…all because they can play football.  They have never had to be accountable for anything that was not on that field.  In a sense, they never matured past the age of about 17.  However, before you think I’ve gone too soft, I don’t think for a second that is an excuse.  It is an explanation, a mitigating factor, but it is NOT an excuse.  They still live in the real world, they still interact with real people, and I just don’t believe for a second that they don’t know right from wrong.  No…they know what is right, and they know that it’s a lot more fun being wrong, and they have always gotten away with it.

Now…as to Roger Goodell.  Do I think that he is responsible for this mess?  Goodell is in charge of the league.  He is the one who sets the rules, the standards to which the players will be held.  He is the one who can (and apparently does) look the other way when it’s profitable to do so.  So yes, I think he is responsible.  Also responsible though?  The culture of this sport that has elevated it above everything, even the law.  Goodell might be making stupid decisions, but he’s making those decisions well within the expectations of the football-loving world.  NFL fans don’t want to know that their heroes are thugs behind closed doors.  They don’t want their fantasy favorites to be benched because they did something illegal or stupid.  Look at the Ray Rice situation.  Everyone knew the story of what happened between him and his fiancee; everyone accepted that short suspension.  They didn’t care about the gory details; they didn’t want to know.  But when a video showed just how brutal his one-shot punch was, and how coldly he reacted, all of a sudden Ray Rice was no longer a hero.  Now he was a thug.  And the fans hated it…not because of what he did, but because it burst that happy little bubble that they were existing in, where NFL players were maybe immature at times, but they were still heroes and great guys.

The league certainly seems to be working overtime now to show that they have a zero-tolerance policy for these things now.  Will it continue?  Will the NFL start to clean house and start to make their players, their employees, act like responsible adults?  Will the fans also start to make their heroes become accountable for their actions?