Elf on the Shelf: Make Mischief Together 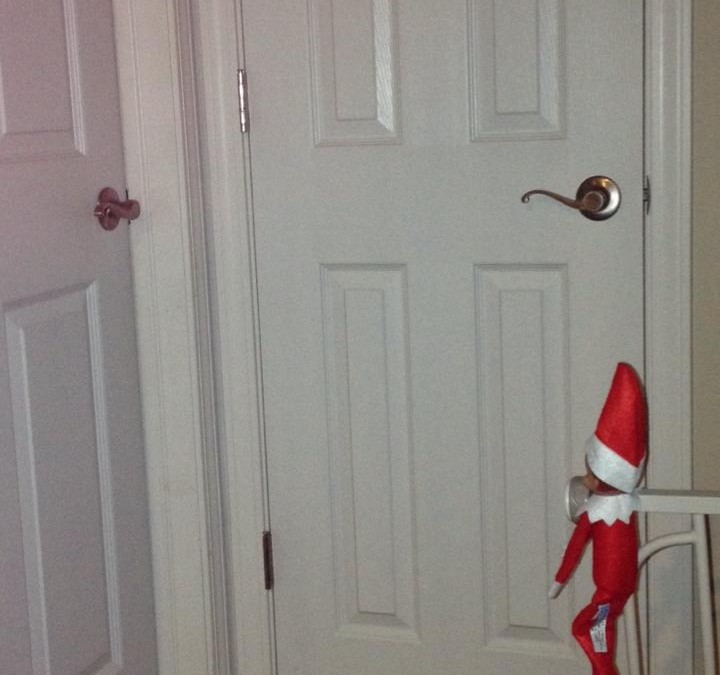 Today is December 2nd.  All over America, little red stuffed elves are descending upon households, making creative mischief to delight the children.  Doors #1 and #2 have been opened on the advent calendars.  Creating Christmas memories has begun.

I never could get any momentum going with the Elf on the Shelf.  I bought it three years ago.  It sat in its box that first year because I decided K was a little young for it at age two.  The second year we spent Christmas in another country, so the elf stayed sealed away in a drawer somewhere.  Last year I finally opened the box.  I stared at that elf for a while, thinking over all of the “elf-positioning ideas” that I’d stored up on Pinterest.  I just could not muster the enthusiasm to start that tradition. It seemed like so much time and effort for something I didn’t feel any magic behind. 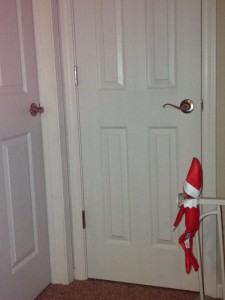 Creepy Elf on the Shelf keeps an eye out for naughty children.

Breaking the seal on the Elf on the Shelf box coincided with K going through a phase of not staying in bed.  We turned Elf (his name) into a sort of anti-elf.  He was the elf she did not want to see.  He would only appear if she was naughty and came out of her room after we’d put her to bed.  If Elf appeared, he might decide to tell Santa to hold back a gift or two.  I know…traumatic.  Actually, kind of creepy too. It worked though.

This year, as Thanksgiving approached and the Elf on the Shelf ideas got even crazier (now they even dress up in costumes!), I started to think about how we were going to play the elf this year.   I didn’t really want to do anti-elf again, but I didn’t want to do all that other stuff either.  I also began to question the practicality of the advent calendar, which I had done the previous two years. It all just seemed like “stuff”.  Stuff to do to entertain kids in the lead-up to Christmas.  Stuff we are hoping will give our kids happy “stuff” to reminisce about.

In mulling over the concept of scrapping advent calendars and elves, I tried to figure out why exactly I was being such a Scrooge.  Is it because I am too lazy to be creative, or am I just a boring mother?  Looking back, did that advent calendar make the difference in whether or not K had a happy Christmas?  Would an impish stuffed elf really have had a major effect on the fondness of her memories?

The other day I read these words written by my friend Jenna Karvunidis:  “I never realized how much of childhood magic just exists without you procuring it. Kids like Christmas. It’s really that simple.”

And it hit me.  BAM!  It is that simple!  We don’t have to turn the month of December into one big fantasy world, with Santa and Elf on the Shelf and advent calendars full of presents and cookies with one bite taken out and reindeer tracks on the lawn. Kids don’t need us to create memories for them. They just need us to be with them as the memories create themselves.

When I think back to all the Christmases of my past, what does not stand out in my mind?  Anything to do with Santa besides a vague memory of when we decided he wasn’t real.  I do remember writing letters to Santa and leaving him cookies, but that memory is just by rote; there are no emotions behind it.  I have faint recollections of specific advent calendars but not of the gifts that came in them.  To be honest, I only remember a few special gifts (a microscope, a certain doll, books) and the rest kind of all blur together.

What are the memories that do stand out?  My family being together.  Love.  Special gifts that I gave and the smiles from the ones I gave to.  The smell of baking cookies.  Sorting through old ornaments and decorating the tree with my sister.  The year the tree dried up a week before Christmas and we had to get a new one and decorate all over again.  The year my sister and I misread the digital clock and woke my parents up at 2 am instead of 8.  Eating chocolate-covered cherries with my grandfather.  Starting a gingerbread house kit on Christmas Eve that required a 24-hour drying period at the end of step one!  Playing board games into the wee hours, eating snacks, and laughing.  Laughing a lot.  Real things.  Magical things.

Don’t get me wrong – the Elf on the Shelf is a fun idea and people have stunned me with the ingenious scenes they create with that thing.  Literally hundreds of ideas have been published to help those of us who are creatively-challenged.  The kids love to find the elf (most of whom have been given names like Rascal or Peppermint) spreading mischief or dropping off a small gift.  Why wouldn’t they?  It’s fun, and kids are all about fun.

The problem is that the children have no idea who is behind the elf.  Parents put incredible amounts of energy, money, time, and cleverness into the Elf on the Shelf, and for what?  The kids will have a vague memory someday of the toy that Mom used to move around the house, but they won’t have the memory of the love that went into it.  They will never have seen Mom’s twinkling eyes as she planned the next elf adventure.  They will never have heard her giggle as she tried to balance the elf on a ceiling fan or posed it with a Barbie doll. To the kids, the elf just appeared, happened on its own, for their amusement. The Elf on the Shelf will be a memory based on “stuff” instead of an emotion.

Imagine instead if we plotted with our kids to come up with silly Elf on the Shelf ideas and posed him together every evening after school.  Imagine taking pictures of the mischief he makes and leafing through that album year after year, sharing stories about ideas past.  Imagine the laughter and the smiles, the warm closeness in creating holiday memories with our children, instead of just for them.

And so, this is my resolve.  Christmas at my house will be drinking hot cocoa, decorating the Christmas tree, cuddling together while watching a holiday movie.  Christmas will be grandparents stopping by for coffee and cinnamon rolls on Christmas Day so my daughter can show them her very special present (hello, giant cheetah!).  Christmas will be listening to carols every morning on the way to school.  My house this Christmas will be full of love, joy, and gratitude.  It will have laughter, it will have smiles.  It will have no stress and no pressure to create every “memory” that is featured on Pinterest.  The Elf on the Shelf will come out of his box again, but K and I will help him make mischief together.

This Christmas my family will be making memories together, the three of us.  Christmas will be warm and cozy, it will smell like cookies and fresh pine, it will ring with the sounds of our happiness.

It will be simple.

And it will be magical.