Dress Code Debate: Who REALLY is Distracted by This Girl’s Pants? 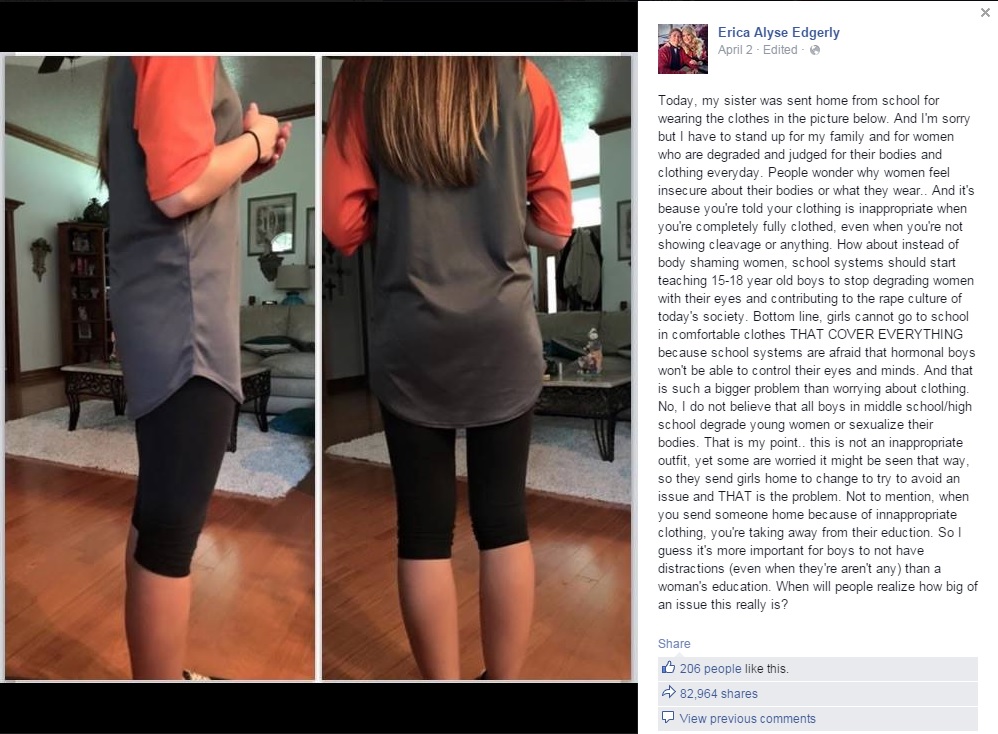 Look at that – at time of publication, this photo had been shared almost 83,000 times!

On April 2, Erica Edgerly posted the above picture of her sister on Facebook. Her sister, Macy, had been sent home from school because of an unspecified dress code violation.

To be honest, when I was scrolling through my feed and first saw this photo, I thought it was another Stitch Fix review. I remember even thinking “Wow, I really like that shirt! I need to ask my stylist to include it in my next shipment.” Then I saw the caption and started to read. And to get annoyed. Was there a distinct policy against leggings, no matter the length of the shirt worn over them?  No one had clarified yet that I can see. If there was, then yes, she was in the wrong; if not, this was another ridiculous move by school administrators in the name of de-sexualizing teenage girls.

Then I read the comments, and…

…Do you really want my opinion on this?  Well, you must or you wouldn’t be here.

First, I went looking for clarification on this dress code. According to the Orangefield High School’s student handbook, page 23:  Tight fitting pants and tights are not allowed unless worn under other garments that meet dress code. The hem of the garment over the tights/leggings must be below fingertips when hands are held straight down at your side.

So, if this is the case, it’s hard to say for sure if she’s compliant, because her arms aren’t at her sides. I can see how, by the handbook, this shirt could be considered too short. However, school administrators should be able to make a decision to take her aside and advise not to wear that again and why. Sending her home in disgrace when the outfit is not showing nudity or underwear is just over the top.

But that is not what caught my attention and made me just disgusted with this whole thing.

Let’s focus on one commenter’s contribution, a woman who seems to be affiliated with the school, judging by her use of “here” and “we”.

She looks adorable, as always, but, not every body style can wear what she’s wearing and look cute!!!! Unfortunately we DO have many hormonal boys here;( I have to support the School Board’s rules. They’re in the handbook even though the tiny girls look precious!!!! At least we haven’t gone to uniforms …yet;) That is the next step:(

FYI. It is never the teachers who send anyone home. We have instructions we must follow from administrators. Often kids are called out and the teacher has no clue why. The students are seated…. And we have more to do than check their clothing! The administrators are getting their instructions from the top. Do you always agree. ???? No. Do you have to send them to the office when they are called?? Yes! They have to set standards across the board. Most students follow the rules. Some push the limits. It’s a shame that those students ruin it for the rest. But that’s what happens ;( nobody LIKES it !! Students or teachers. But you have to make all follow same rules. Just like society in general or traffic regulations. Same concept. However…yes, Macy is PRECIOUS!!!!!

Tossing aside the absolutely nauseating “She looks adorable…but, not every body style can wear what she’s wearing and look cute!!!!“, “tiny girls look precious!!!!” and “Macy is PRECIOUS!!!!” weirdness, I want to focus on this:

Unfortunately we DO have many hormonal boys here.

Excuse me while I grind my teeth for a second.

Since neither gender of hormonal teenagers has ever complained about the opposite sex being too attractive, or blamed clothing on misbehavior, or failed a test because of another kid’s pants, I have to deduce that this overly-paranoid fix-all for teenage glands comes from an adult. In fact, as an adult who spends most of her time with other adults, I am certain of it. With the exception of a few teenage bullies, the trolls who come out of the woodwork whenever a sex crime happens in school are adults.

Adults are the ones blaming the clothes.

The problem is not with these “hormonal teenage boys” but with the adults that are charged with their education. The boys are not the ones sexualizing the girls based on their clothing. The adults are. Which…is creepy.

Throw feminism out the window.

People always seem to be quick to say “It must have been a man who came up with this” but I honestly have my doubts. Did you see the “precious” and the “tiny girls” and other patronizing, demeaning sugar-crap that commenter was spewing? Did you see that it came from a woman?

This isn’t a situation where men are trying to protect the delicate eyes of the teenage boys. This is an issue with women who are afraid to let girls learn on their own how to cope with ogling and catcalls. I’ve read countless articles, reposts, and Facebook shares of this situation and the comments that were in the “we must cover up our girls to protect them from the evil thoughts of boys” came from women. Women, for all their talk about how they raised/want to raise the next generation’s daughters to be strong and empowered, who seem to be terrified that a boy might find the girls attractive, or even *gasp* be sexually aroused by them. Maybe these women had a bad experience in their own youth, or knew someone who had, or saw a Facebook post from someone who did…all they can envision is their own helpless little girl at the mercy of what a boy might be thinking.

So, instead of using these experiences to further strengthen our girls’ self-esteem and confidence, they go further and further backwards, blaming the girls’ hair/clothes/makeup for the perceived “uncontrollable urges” of the boys.

Look, I have a daughter. I am not afraid of boys, and I will not raise her to be afraid of them either. I will raise her to be proud, modest, and respectful of herself. She will be self-confident and she will not be made to feel ashamed if a boy classmate thinks she’s cute. A girl shouldn’t be going about life worrying that everything she does is somehow triggering lewd thoughts from the opposite sex. She should go about life saying “I don’t care if he is thinking something sexual about me. It’s not my problem.” And unless she is striding around wearing a “please ask me for sex” sandwich board, it really is not her problem.

Seriously…can we get a grip on this, please? School boards everywhere? Set a uniform. Set specific dress code rules. But quit making up violations every time you see a teenage girl in something that is not remotely immodest or sexual. If your teachers and administrators cannot maintain control of the children in their schools, then there is a bigger problem then someone wearing a shirt that is two inches too short.