Kitty Countdown Calendar: Why I Will Never Be Famous on Pinterest 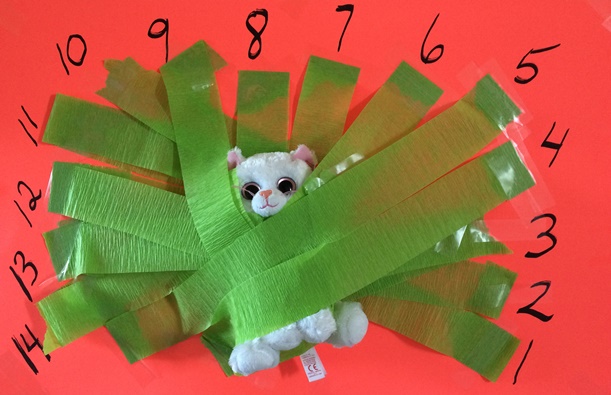 Ever since I was little, I was obsessed with counting down to things. What began early in life as endless paper chains has devolved into complex Excel spreadsheets today. I can't explain it - there's just something about having a visual reference when there is something you're really looking forward to.

My daughter, who is 6, adopted the Countdown Calendar concept earlier this year. We had a family "vacation" weekend scheduled and, still struggling with the concept of days/weeks/time in general, she made herself a little chart to be able to see how much longer she had to wait. 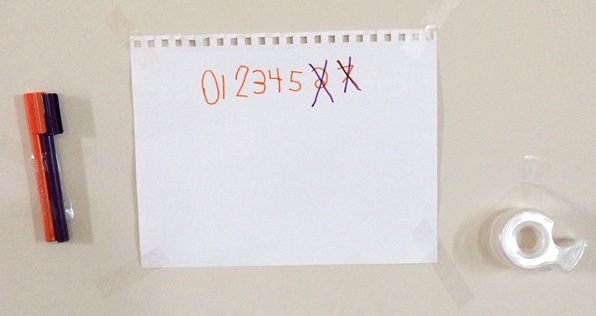 I dearly love how she taped the markers to the wall so they would be handy, and taped the tape to the wall as well. It's an all-in-one Countdown Calendar kit!

After that vacation, she wanted to have something else to count down to. (I've created a monster!) Coming up at school is Field Day/VIP Day, where she gets to bring her Poppa to spend the whole day with her. She decided she needed a countdown calendar for that event.

She is obsessed with fluffy white kittens right now, so I said I would print out a bunch of kitties on a piece of paper. Two days went by and I forgot both days; it was crazy at work and I just didn't remember. On day 3, a Friday, as I was driving home, it hit me that I forgot again. #badmom My stomach actually hurt because I felt so horrible.

I made a desperation stop at the Dollar General, praying to find some kitty stickers or something I could have her use to cross off hand-written days with. Something - anything - that could pass as a kitty-themed countdown calendar.

I roamed the aisles. Not a kitty sticker to be found. No kitty coloring pages or even party favors. Nothing.

Suddenly I spied a tiny box of Ty stuffed animals (those adorable ones with the big eyes). The box was mostly empty and had elephants and tigers. My heart sank. I was out of options.

Then I saw it: a teeny spot of white fur peeping out from underneath the tigers. It was a white kitty!

I grabbed it, but then I hit a mental block. I tried to picture what all the awesome Pinterest moms might do with a stuffed kitty in a dollar store. At first I thought of a paper chain, but a) I had to construct this thing in my car, and b) a kitty dangling by the neck on the end of a paper chain seemed a little...disturbing.

Then inspiration struck. I took the kitty and headed over to the art supplies. I'm sure the cashier wondered about my random selection of purchases after the 30 minutes I'd been roaming around his store.

So yeah, this is why I will never be a famous Pinterest mom:

So ... party streamers, posterboard, a marker, a stuffed kitty, and a LOT of scotch tape, and voila! Cut off one streamer each day until day 1 and the poor kitty will be released!

I got home and was so glad that I did this. She was waiting at the door, hopping with excitement to see her promised Kitty Countdown Calendar. I sent her to her room so that I could get this thing hung on the wall. My husband cracked up when he saw it.

Somehow it held together as we secured it to the wall with more tape. I called K to come out and see her countdown calendar.

You should have seen her face. It was a Christmas-morning-I'm-at-Disney World face.

I decided in that instant that I am glad that I'm not a super-Pinterest mom. Maybe my ideas are wacky and my crafty skills marginal, but I will never forget how much she loved this cobbled-together-in-the-car countdown calendar despite its simplicity and obvious improvisation.

When I asked her if she liked it, she laughed and said "I love it! I was only expecting a piece of paper with kitties printed on it to cross out!"

Yeah...next time I am setting myself a reminder to do that printout. In the meantime, I'm just hoping that my engineering of Day 1's streamer keeps that kitty secured to the poster.