Have you heard of it?  Just a little bit?

Never mind that, as of April 2014, the movie made $1.097 billion gross profit at the box office, making it the highest grossing animated and musical film of all time.  Never mind that it won 2 Academy Awards and 1 Golden Globe.

Kids don’t care about any of that.

Every child ages 3 and up* can sing the lyrics to “Let it Go” from start to finish.  Every parent of those children can also sing those lyrics…in the car, in the shower, in their heads, in their nightmares.

The top selling costume for girls in the Kids and Toddlers categories is…you guessed, it!  Elsa. My husband and I have a bet going as to how many Elsa costumes we will see this week. I secretly have one already – my niece.  (Ha! Me – 1 Husband – 0)  Running a close second and third are Anna and Olaf costumes, which also come in sizes ranging from “just born” to “fun-loving grown-up”.

Probably the last group of people anyone would expect to see dressed up as the cast of a Disney movie would be big, burly men who play in the National Hockey League.  But they did, and it is beyond delightful.

Every year around Halloween, the Boston Bruins visit the sick children at Boston Children’s Hospital.  They dress up in costumes and bring cheer to the little kids.  This year, Dougie Hamilton, Matt Fraser, Kevin Miller, Matt Bartkowski, Torey Krug, and Seth Griffith went above and beyond and showed up as Frozen characters.  Seriously.  You must see these photos from Twitter: 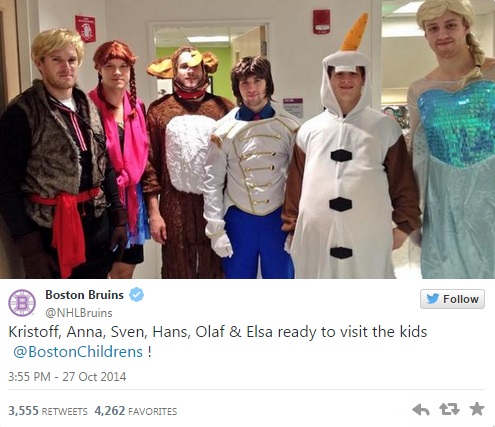 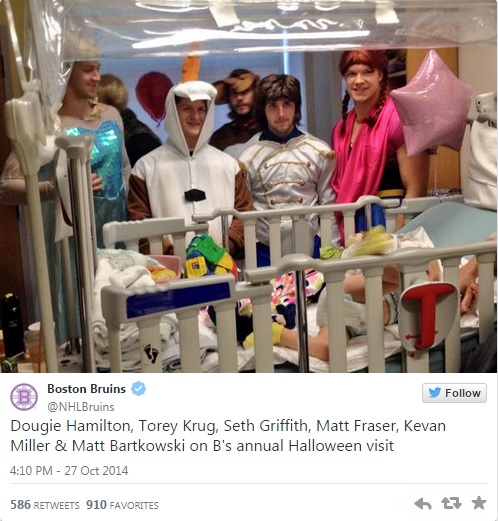 The braids!  The Olaf with misplaced carrot.  The reindeer.  But it is 6’5” Dougie Hamilton, tall and proud in his blond wig and pretty blue Elsa dress, who is the icing on the cake.  A more heartstring-tugging band of ragtag Disney characters you will never see.  Add to the costumes the unabashed singing (“Let it Go”, of course), and the awesomeness is complete.

Maybe you are Frozen-weary at this point.  Maybe the thought of hearing that song one more time makes you want to throw things.  Maybe you groaned when your child asked to be Elsa this year.  (My daughter is going as a decidedly non-Frozen cheetah, although she says next year she’ll be Elsa.  I’m fine with that; there will be about 10,000 used Elsa costumes available secondhand by then.) Anyway, maybe the thrill of the movie faded away months ago.

Even if the Frozen magic is gone for you, it is impossible to not be touched by the absolute sweetness of those Boston Bruins players, guys who were willing to put aside any embarrassment to bring a few hours of fun and laughter to sick children.

*Slight exaggeration. Possibly not every child.